There are a few important messages for all those who have been involved with our Society, whether it be attending the annual reunions or through correspondences with us.

I wish to take this time to first wish you and your families all the best in the Holiday season, may good health and happiness bless your home and families now and in 2015.

I would like to report that our 34th annual reunion resulted in a very low turnout and due to this our decision was made to hold one last reunion on Saturday September 19th, 2015. It will be held at the Saint John's Anglican Church Hall, Main Street Fredericton at the usual times of opening the doors at 9am and closing at 5pm. If you have thought about and not yet been able to attend this reunion, now would be the time. It will mark the 35th consecutive gathering of the BHC and descendants. We are open to descendants of all sending agencies, which because it is sponsored by the Middlemore Atlantic Society, it has sometimes be thought that it only pertains to those families through which their Home Child was sent by the Middlemore Homes. I just wish to clear that up.

On November 11th it was a great pleasure to represent our Society and the BHC veterans by placing a wreath at the Sussex cenotaph in their memory. I was also pleased to hear that our Secretary, Nancy Avery-Easter also placed a wreath in her area. The Nova Scotia sister association representatives, Wayne and Jeanette McNutt Large, placed the wreath this year in Tatamagouche,NS. Other wreaths placed in memory of BHC were by Hazel Perrier (Memory Quilt) Claresholm, Alberta; Sandra Joyce (author) at Queen's Park; Judy Neville of the Ontario BHC Association and notice was sent to us that markers were placed in Solihull England to honor BHC world wide.  It is wonderful to see that these people were not forgotten so it would be great to see that more descendants take part next year at their local cenotaph service and place a wreath as well.

Now on to the subject matter of our servicemen..... It is a great pleasure to announce that the 35th reunion will be centered around WWl and WWll BHC veterans and who better to be our special guest speaker than noted Historian and specialist with the armed forces service men than Harold E Wright of Saint John, NB. Mr. Wright and myself will be compiling a list of the Home Children who served in wartime and offering a presentation. To date I have confirmed 300 of these children who were placed by the Middlemore Homes and many more yet to find. These children were placed in New Brunswick, Nova Scotia and Prince Edward Island homes and what I have seen so far, many were under age at the time they signed up. In fact one boy from Carleton County was returned home injured after serving three years and still he was not 18 years of age.  The data base will also contain children from other sending agencies.

This is where I hope many of you will come into assistance with our presentation. I am asking for families to submit the names of their BHC who served in any capacity during the War efforts. I would like the name, regiment number, known service record and if died in war, their known burial location as well as any medals they may have earned. A photograph of the individual will be most welcomed.

The site below is making great grounds to list the service files on all those of WWl and it might help you further a search for you and your family. The entries for  this project is expected to be completed in 2015 by the LAC.

In order to work on this subject matter for the 2015 annual reunion I have to ask that, if you so chose to be involved, the deadline for submission will have to be set as  February 28th/2015. I hope you will consider this project and the sooner you can submit, the better.

Another matter that is quite important is that we have a face book group which you can locate by searching Middlemore Atlantic Society Group and I strongly urge you to join up so that you can keep up with current events and news. The group we have can be an enormous help to each other. No one person can be a total expert and assistance from others can help you solve mysteries with your family history.  So please consider joining and sharing if you wish. Our web site is still up but has not very active this past year. The current trend seems to be with Face Book.

So again, the dates to remember this year is the 35th annual reunion on Saturday Sept.19th/2015; and if submitting to the servicemen project, it is Feb.28th/2015

We do not do mail out news letters so please inform your family members so that they too will have a chance to keep up with this Society and hopefully attend in the Fall or join us on face book.

This 94 page book includes individual`s stories, the origin of the Middlemore Reunions, and events over the past 30 years ending with the 30th reunion and a few of the `families reunited`stories. There are many photos included. The retail price of the book is $25.00 and can be ordered directly through Marion Crawford, 75 Stoney Hill Road, Belleisle Creek, NB, E5P 1K8, or marionbhcd@gmail.com

After Sept.18th this quilt will go to Lethbridge & Edmonton Alberta. Locations will be announced at a later date.


is email is courtesy of CottageCountryNow,=a division of Metroland Media Group. 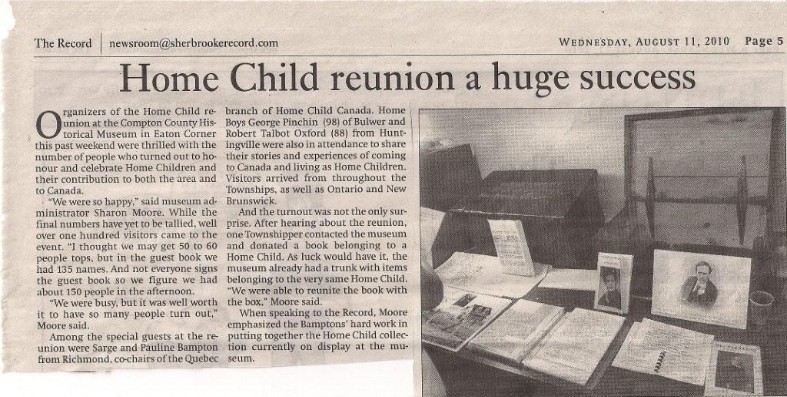 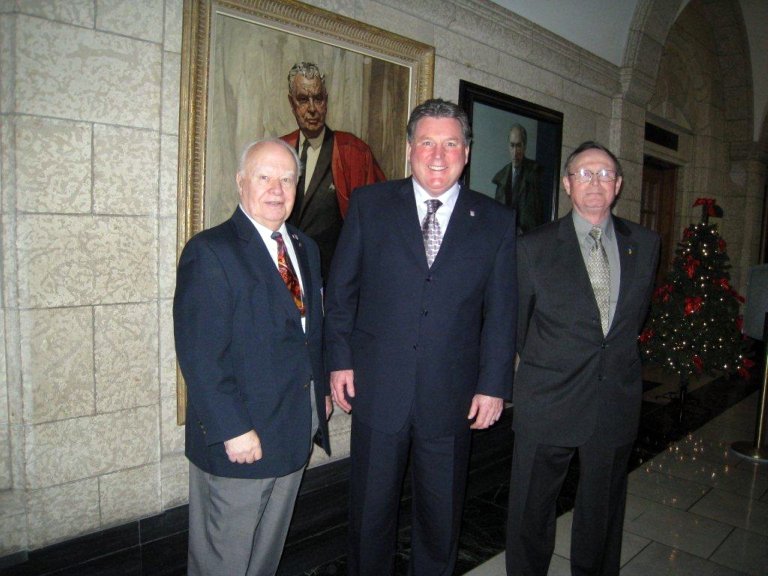 photo courtesy of David Lorente:         David Lorente, Phil McColeman, and John Sayers after the successful passing of the Motion to declare 2010 Year of the British Home Child 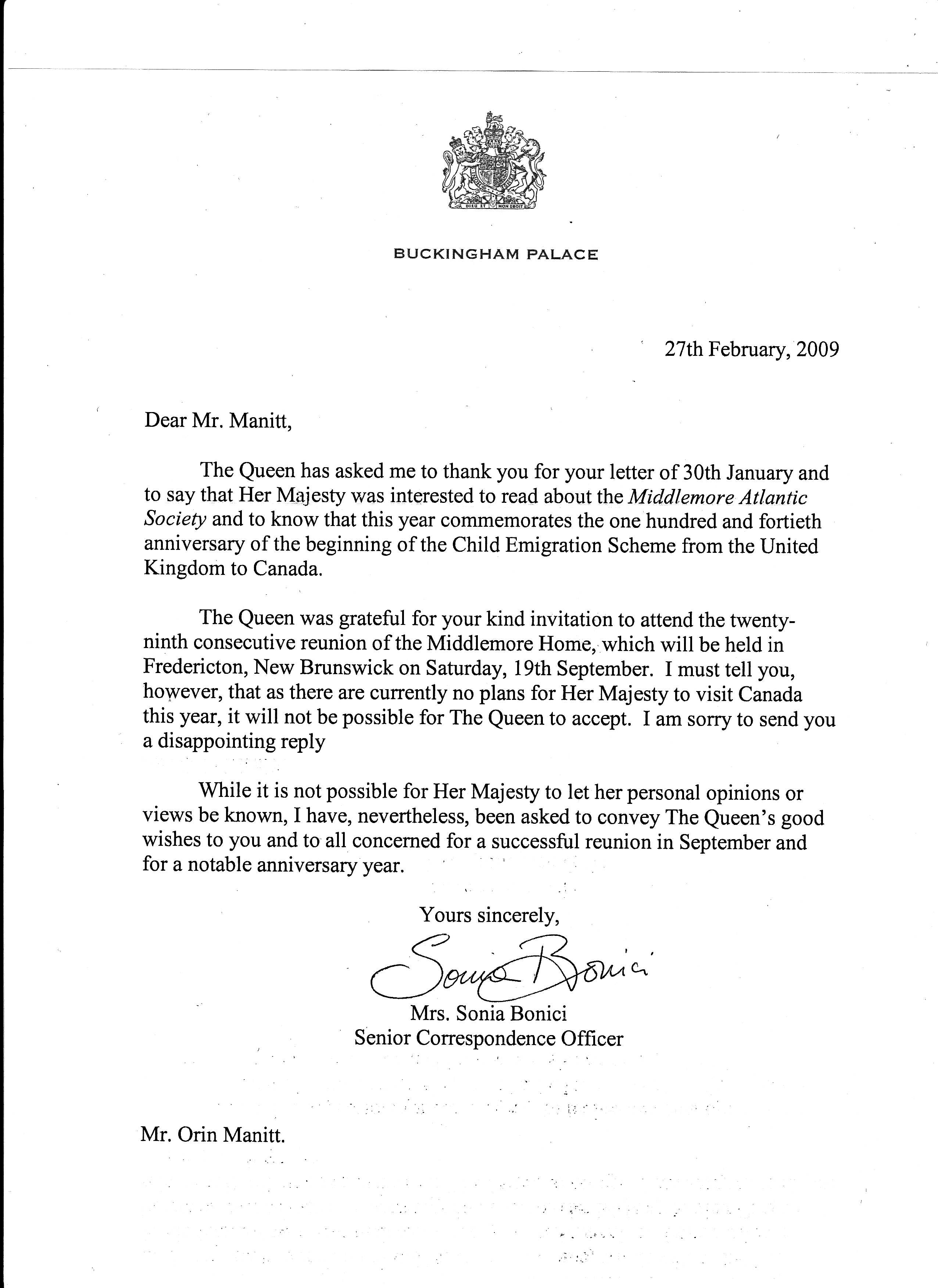 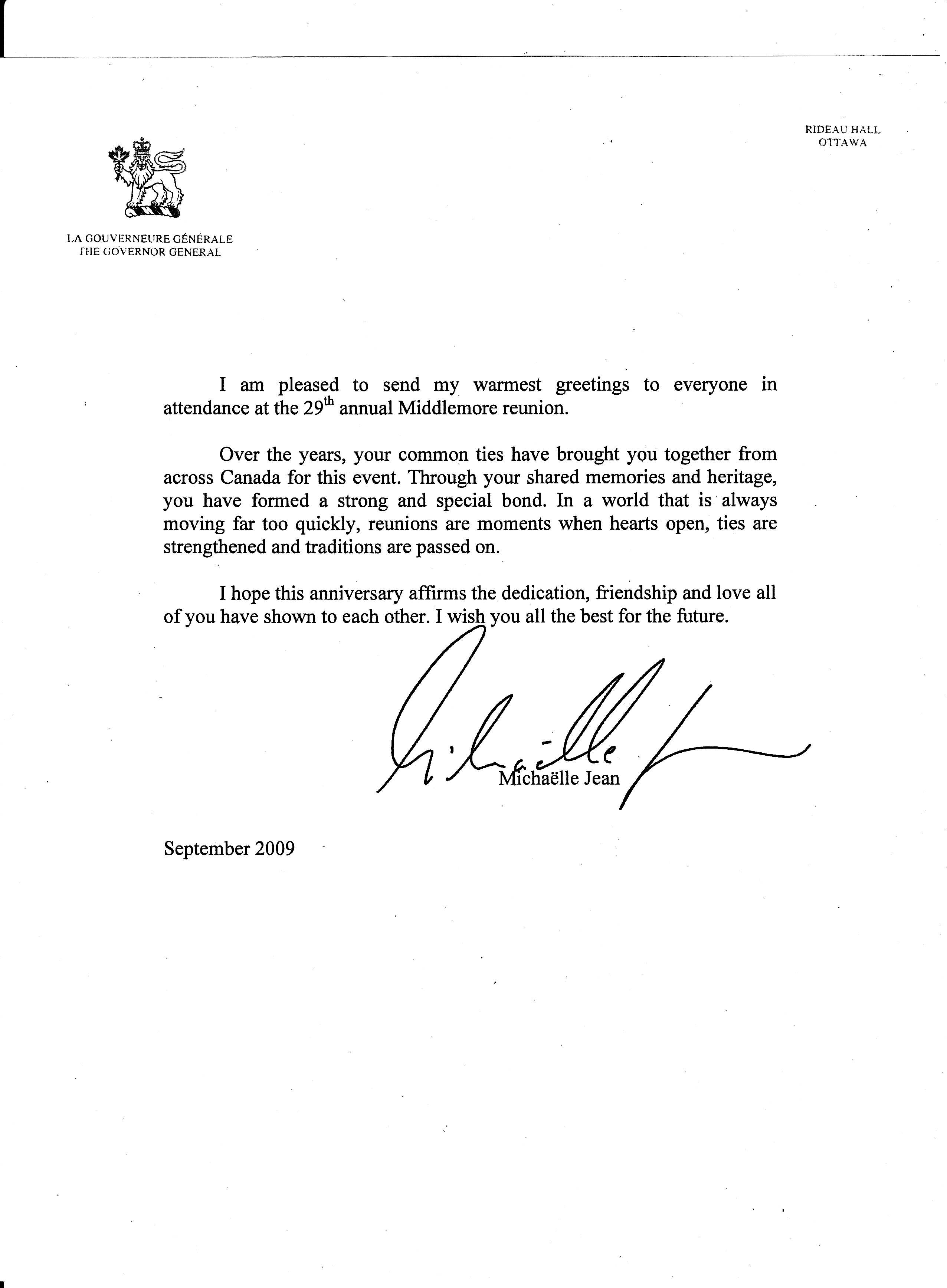 On Dec.16th/2008, the motion (#24) was read by Hon. TJ Burke and seconded by Mr. Bev Harrison. It was passed with unanimous support from the Members present. Clothing and mugs were a fundraiser and also to show support for this project.
We, and many other groups and individuals across Canada and even from the United States and Great Britain have been attempting to get the Canadian Government to make this same declaration, to recognize the British Home Children. Support from Veteran’s affairs Minister, Greg Thompson and his staff have gained us the opportunity to have a motion read by Phil McColeman of Brant, Ont. Our only problem was in the timing of this motion. Due to the fact that it will be September or October before the motion makes it’s way to the first reading, we have decided to alter the motion and declare 2010 as the Year of the BHC.
We would like to suggest to all members attending this year’s reunion or viewing this update on our site, to call your local Federal Representative in September and ask that they support our efforts for this motion. Get your family and friends from all across Canada to do the same. Timing now is everything as the Fall Session begins on Sept.14th.
Therefore it was decided that we would again sell mugs and clothing and change the Logo to 2010, Year of the British Home Child to represent our Canadian effort. We hope that you will continue to support our Society with a purchase that you can use and enjoy.
Price list of items available: 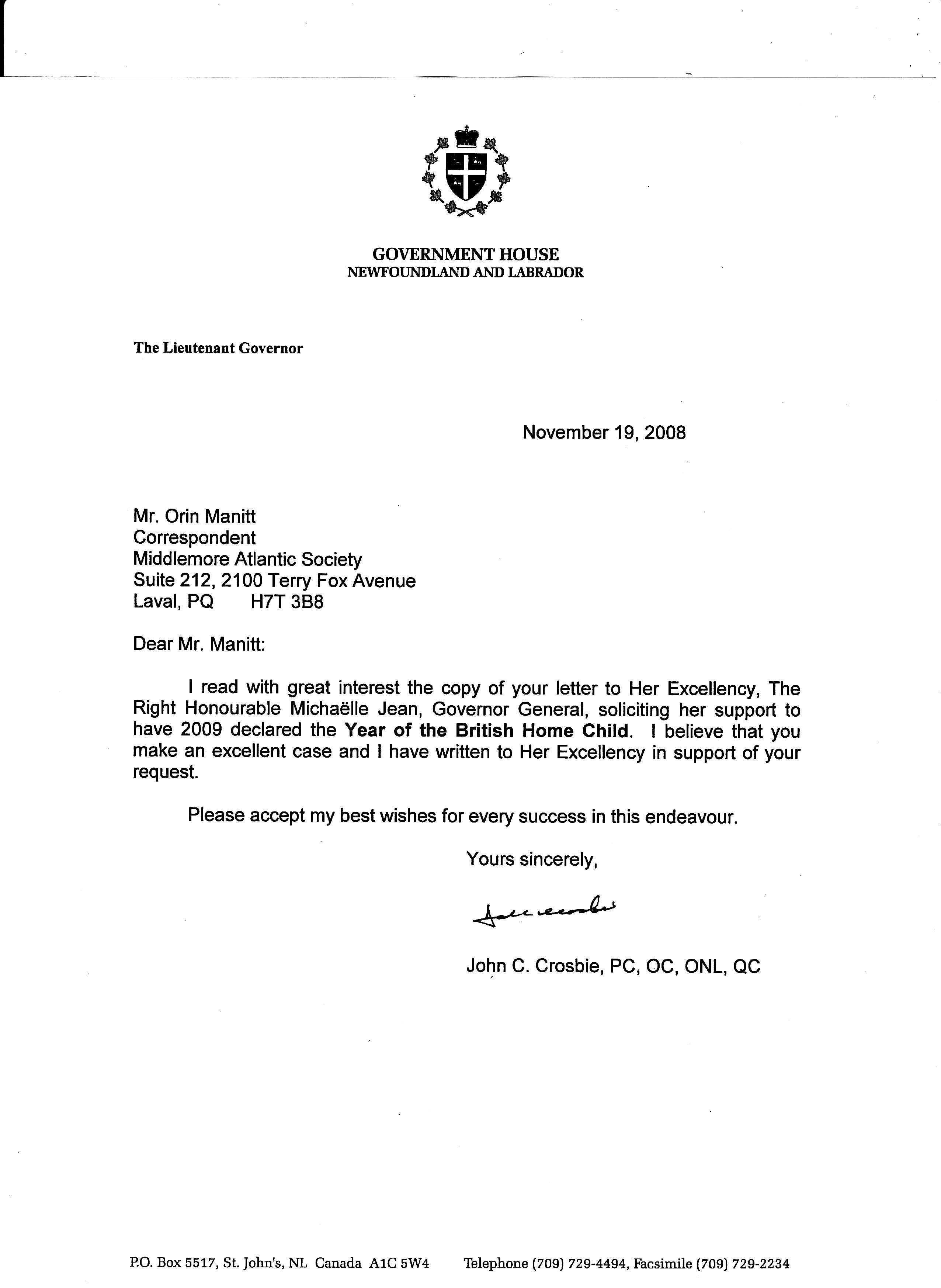 In November, I was invited to participate with the Grade 7 class of Belleisle Regional High School, in their studies of the British Home Children section of their Social Studies Program. The children viewed the documentary, "Childhood Lost", a production of Global TV, which involved the lives of British Home Children in the Maritimes, as well as Ontario. With their course material and the documentary, the children prepared a list of questions for me to answer. I was able to supply material from my personal collection, which included posters of photos and detailed stories from press releases; ships that brought the children to Canada; and a collection of photos donated to our Society from our members. It was a very rewarding experience to share my knowledge with these children. They were enthusiastic about the presentation given to them and they fealt they came away with a much broader level of knowledge for having had this offered to them.

UPDATES ON THE 2009 PROJECT

Dear viewers, I would like to bring to your attention to the latest news for the 2009 Year of the BHC Project.

As most of you are aware, we launched the letter writing campaign last spring, asking for the support of our Provincial and Federal members of Government to have 2009 declared for the British Home Children. Our efforts have been less than satisfactory on a National level. An example of this is based on one of our members of the Middlemore Society, who sent off 111 letters to leading figures of the Provincial and Federal Political standing. The results of his efforts showed less than a 20% response.

However there was a unanimous support by the Province of Nova Scotia right off the bat. Liberal, Conservative and NDP members passed resolutions that were then forwarded to Ottawa for their consideration. Here in New Brunswick, we have been officially recognized by the Provincial Government on December 16th,2008. Motion #24 was brought forth in support of this project. It was introduced by Hon. T.J.Burke and was seconded by Mr. Bev Harrison. The motion was passed unanimously. A copy of the transcript can be sent (by email) to anyone wishing to have a copy.

With the lack of our Government’s acknowledgement, our Society felt we had to make a new approach in hopes that this project will still be declared on a National level. In November, support was summoned from many key participants with the Home Children saga. In the United Kingdom, we received support from Shirley Hodgson, of the Bristol & Bath Historical Society, Bristol; Councilor Reginald Corns and Cabinet Chair, Councilor Michael Whitby of Birmingham City; and Councilor Randall Drew, Deputy Lord Mayor of Birmingham. As well we are also honored to have supporting this project, Sian Roberts Archivist of the Birmingham Central Library and Archives.

On our Home front, we were able to include David Lorente, founder of Home Children Canada, Perry Snow, founder of the BHC web site, and Gail Collins, of the Maria Rye data Base.

Together with the NS Home Children and Descendants Association, we addressed a letter to our Governor General, Her Excellency Michaelle Jean, and as well to the Provincial Lieutenant Governors for Canada, asking that they play a role in support of this most worthy project. Although out of the Country at the time our letter was issued, a reply did come back from the Governor General’s office. The reply from Yonathan Yew, her correspondent, stated that we should contact our Federal MP’s.  I would like to mention that Newfoundland’s Lieutenant Governor, John Crosbie, replied very promptly and sent his support to Her Excellency. We have since discovered that Her Excellency is unable to state her interest for issues of this nature. Therefore further attempts are being made to our Federal Members of Parliament.

On a positive note, during the first week of February I had a conversation with the Office of Greg Thompson, Ottawa. This office has summoned the aid of two members of the Legislature to commence research and preparations for a possible motion to be introduced. I will keep you all posted as news developes on this issue. 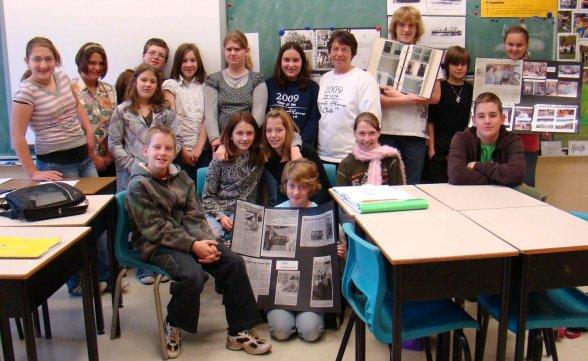