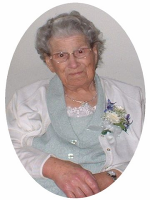 Born April 21/1914
Died Aug./2004
Arrived in Canada June/1928 SS Newfoundland
Annie (Fereday) Cairns has been the inspiration to continuing the Middlemore Reunions. Over the last several years, there have been many articles in the newspapers and in two documentaries compiled on the stories of Home Children to Canada that Annie was involved with. Annie also took the time to compile her stories and from her works, you can read about her life and times as a Home Child.

“ I was twelve years old when my mother and father separated and I was put in the Middlemore Home on St. Leedes Road in Edgbaston. I could have gone to live with my grandmother, but I had a choice either to go live with her or go in the Middlemore Home and when I was fourteen, I would be sent to Canada. I had read ‘Anne of Green Gables’ in school and I thought I would love to go to Canada as I thought it must be a lovely place to live if it was like Anne of Green Gables. I was very happy in the Middlemore Homes, happier than I had been in my own home. They were good to me, we had good food to eat and good clothes to wear and I got invited out to parties and concerts all around Edgbaston.”

“The Cadbury’s especially were very good to us children in the homes and at Easter they sent us Easter eggs and at Christmas, chocolates and a present each. Mrs. Cadbury always had us for a day at her lovely home in the country and I remember it was always looked forward to by us girls.”

The children all had a routine to carry out each day as well they knew what their meals were to be as the Home kept it the same each week. Here Annie would learn several skills that would help her in her work in Canada.

“I remember before we left for Canada, we went to the Town Hall in Birmingham and we were presented with a Bible and a new shilling. The verse at the front of the Bible was ‘ Be not afraid neither be thou dismayed for the Lord thy God is with thee whither so ever thou goest’. A passage Annie was to read over and over again for strength.

“It was the 27th of June 1928 when 23 of us boys and girls set sail for Canada from Liverpool on the S.S. Newfoundland. We spent three days at St. John’s as it was a freighter and had to unload there and I remember us all going on land and we went up Citadel Hill and all of us wrote our names in the book there. Three days later we got to Halifax and Mr. And Mrs. Ray were there to meet us and take us to the home in Fairview. We had our first meal of baked beans and Johnnycake, which we had never eaten before and was new to us. We were to eat that same thing every other day all the time we were there, which was to be until September for some of us girls”.

While staying here, until a home could be found for some of the older children, they were put to work doing the washing by hand on a wash board, picking stones from the fields, and picking berries to make into jams along with the house work.

“At last it came time for me to leave on the 21st of September to go to a farm in Petitcodiac, NB. I felt very lonesome standing there on the station platform with my bag by my side and my name in big block letters on it. We passed so many white houses along the way and I hoped it would be a nice white house when we got to it, but after going 10 miles, it was a gray-shingled house…no curtains in the kitchen windows. I was not allowed to visit the English people, next door, as they were called dirty and pig-headed and Johnny Bulls by the woman I worked for. My first outdoors job was picking apples and wrapping them in newspapers and putting them in barrels to keep for the winter. Winter came on and it was my first taste of Canadian winters. I would have to wade knee deep to go out to the toilet which was quite a way from the house….I would look back at the house and there would be two girls of the family looking at me and laughing at the way I was wading through the snow. I wore my summer coat and straw hat until the end of January when the woman of the house decided to take me to Moncton to Eaton’s end sales to buy me a coat and hat.”

I learned to do all the things around the farm, planted potatoes, picked potatoes, picked the bugs off the potatoes, hoed the corn, and thinned the turnip as well as the work inside the house. I had to learn how to cook pancakes as we had them three times a day. I used to tear them sometimes when turning them over and she would say, ‘if you don’t stop tearing those pancakes, I’m going to put your hand on the griddle and burn it.’

I didn’t have anyone to talk to all the time….the people from the Home would come to visit once a year in the summer. I would be working in the fields and was never alone with them to tell them just how things really were like, so they never knew. I used to get down on my knees every night and pray to God that I would be taken out of there and I was, after awhile…”

After two and a half years there, the lady of the house went to visit her sister in the USA. Annie was washing the curtains when she got a needle, left in the curtains, stuck in her hand and it broke off there. Blood poisoning set in and had to visit the doctor. The man, of the house, had his sister come over and she offered to help Annie with the cooking, It was only after Annie was able to explain to her about the situation, that this sister decided to take her away to her home. From there Annie found work for the Doctor who had operated on her hand.

“All the other places I went to work at, the people were all very good to me. I got along with everyone and did not have any trouble. I found out that all Canadians were not the same as the ones I had first come to work for”.

“I have done well for myself in this Country and all the Middlemore Home boys and girls that I’ve met have done the same. We all had to be self-reliant… we had no one to fall back on. It was an experience that was unique and should not be forgotten. I think we should be very proud of the Home Children and to think we survived the hard times on the farm and did as well under such trying circumstances.”